Hysterectomy is the surgical removal of the uterus and, if needed, surrounding organs and tissues. Hysterectomy may be recommended for women with fibroid tumors who don’t plan to become pregnant in the future. Each year in the U.S. alone, doctors perform approximately 600,000 hysterectomies, making it the second most common surgical procedure for women.1 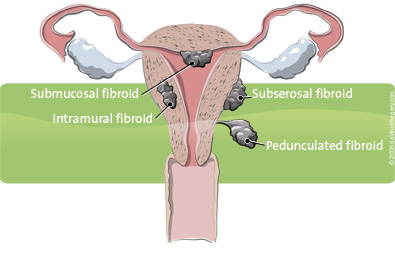 During an abdominal hysterectomy (open surgery), your uterus is removed through a large open incision. The incision must be large enough for your surgeon to see your organs and fit his/her hands and instruments inside your body. 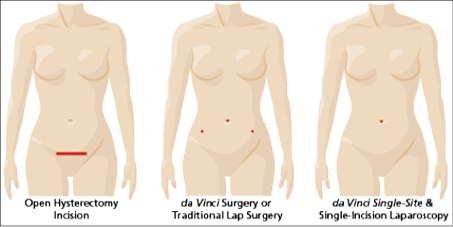 Vaginal Hysterectomy – A vaginal hysterectomy is done through a cut in your vagina. The surgeon operates through this incision and closes it with stitches once the uterus is removed.

Traditional Laparoscopy – With traditional laparoscopy, your surgeon operates through a few small incisions in your abdomen using long instruments and a tiny camera. The camera sends images to a monitor in the operating room to guide doctors as they operate.

da Vinci is a minimally invasive approach that uses the latest in surgical and robotics technologies. Your surgeon is 100% in control of the da Vinci System, which translates his or her hand movements into smaller, more precise movements of tiny instruments inside your body.

Serious complications may occur in any surgery, including da Vinci® Surgery, up to and including death. Examples of serious or life-threatening complications, which may require prolonged and/or unexpected hospitalization and/or reoperation, include but are not limited to, one or more of the following: injury to tissues/organs, bleeding, infection, and internal scarring that can cause long-lasting dysfunction/pain. Risks of surgery also include the potential for equipment failure and/or human error. Individual surgical results may vary.

Risks specific to minimally invasive surgery, including da Vinci Surgery, include but are not limited to, one or more of the following: temporary pain/nerve injury associated with positioning; temporary pain/discomfort from the use of air or gas in the procedure; a longer operation and time under anesthesia and conversion to another surgical technique. If your doctor needs to convert the surgery to another surgical technique, this could result in a longer operative time, additional time under anesthesia, additional or larger incisions, and/or increased complications.

Patients who are not candidates for non-robotic minimally invasive surgery are also not candidates for da Vinci surgery. Patients should talk to their doctor to decide if da Vinci Surgery is right for them. Patients and doctors should review all available information on non-surgical and surgical options in order to make an informed decision. For Important Safety Information, including surgical risks, indications, and considerations, and contraindications for use, please also refer to www.davincisurgery.com/safety and www.intuitivesurgical.com/safety. Unless otherwise noted, all people depicted are models.